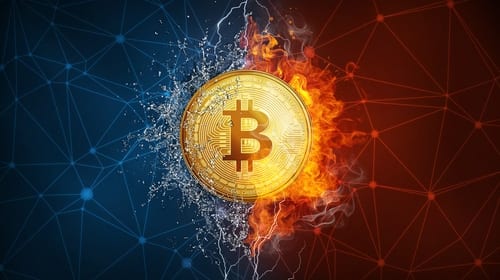 The dawn of cryptocurrency and blockchain has brought with it some interesting concepts–along with new jargon to describe them–such as “soft forks” and “hard forks.”  A hard fork refers to a change in the protocol or an upgrade to the protocol software. This often results in the creation of new cryptocurrency out of the old one–the old one continues to exist alongside the new one. A soft fork happens when previous transactions are invalidated through a change in the software protocol. Hard forks are the more common of the two types of forks.

A lesser-known coin, known as Bitcoin Rhodium (BTR), is a Bitcoin descendant, but not from a hard fork.  According to its website, it is one of the rarest cryptocurrencies, with only 2.1 million BTR available in the market. It was created by Bitcoin’s blockchain development team and introduced towards the end of last year through an “airdrop,” a process in which tokens are distributed to existing cryptocurrency holders, which started in December and was scheduled to end on March 31.

Bitcoin Rhodium is being developed as a new cryptocurrency–in spite of its name–using C# as the programming language.

The agenda of the team working on BTR was to work on a coin that would be extremely rare while still containing all the best features of Bitcoin. According to the coin’s introduction paper, only 2.1 million BTR will ever be available; half of them were introduced into the market for trading while the other half will be acquired through crypto mining over the next 100 years.

Making Bitcoin Rhodium a scarce cryptocurrency was part of the development team’s idea of not only offering it as a payment method but also as a valuable coin. Even the name was adopted from one of the rarest metals on earth. This rare nature of Bitcoin Rhodium also makes it designed to be an ideal store of wealth. The development team created a community that will provide long-term support through a VoIP app called Discord.

While Bitcoin Rhodium was centred on scarcity, Bitcoin Cash was created as a solution for Bitcoin scalability problems. It is also used to make payments and can also be mined just like Bitcoin Rhodium.